Working the trails in Israel reminds me of Sol’s candy store in my old Brooklyn, New York. So many delectable choices, most never tasted to-date. This Upper Galilee trail is several hours north of Tel Aviv, in the hills that continue east to the Mediterranean Ocean, and rise steadily to the west, up to the peaks of the Golan Heights.

Corn Poppy was at it peak last March of this year 2015, and the Madison Avenue crowd knows that this rich hue is a spring trap for healthy folks of the male gender. It sure caught my attention, TBT.

How much butterfly traffic does it create? I did devote some minutes to study that question. Not a single butterfly visited, on either of the 2 mornings that I worked this trail.

This post I won’t mention any bad boys of the Middle East. Just a smashing bloom, set down there, then, for Jeff’s enjoyment and imagination.

It was one Oh! after another Ah!! on those trails in Hanita, Israel just months ago. There were dozens of wildflowers and butterflies that were new to me. Happy as a duck, in the northeastern corner of Israel, in the foothills of the Upper Galilee. Less than a U.S. mile from the Israeli-Lebanese border. Not a care in the world, despite bloody Hezbollah so physically close. Ever had millions of people wanting to stick you like a pig, just because of your ancestry? Savagery, despite the efforts of so many loving people, never seems to completely disappear.

This darling wildflower, Protected, was present in abundance. Like many flowering plants in this world, its habitat is steadily eroded, in the name of progress, homes, and such. Hilly land like this faces less threat.

Well friends, I’m booked to fly to Israel in late February ’16, and return home to the States in late March.

My present plan is to visit different SPNI field schools in the Upper Galilee and the Yom Kinneret (Sea of Galilee) area. Wow!

Sharp knives are now the weapon of choice for the butchers of women and children in Israel. Funny, when I attended college in New York City, I rode the subways daily, from one end of the city to another. Those were dangerous times on the subway, and . . . I always could feel the cold presence of long steel on my person. Grew up on the streets, and He looked over me during those 4 years of riding New York’s grand subways. Knives?

Anyone like to join me on 2016’s exciting HolyLand trails?

So, I’m thousands of miles from home, out on the trails of SPNI Hermon, on a sunny March 2015 morning. To give perspective, this site shown in the image is less than 5 miles away from where Russian fighter jets are now flying combat missions in Syria. G-d willing, this ground remains as peaceful and remote as it was that March day. Israel remains strong, and this mad world of ours respects strong.

So I’m traversing the trails of this large SPNI reserve [Society for the Protection of Nature in Israel (sort of like the US Audubon Society)] and with my hunt for new butterflies, I’m being stopped repeatedly, because, Wow! what plant is this? OMG! I’ve never seen a flower like that!! 7,000 miles away, in the heart of the Middle East, encountering blooms that they admired thousands of years ago.

My Hebrew? 4% efficient. My field guides are in Hebrew, and the text remains a mystery. Despite a serious difference in color, it would appear (don’t you love that phrase) that this blossom is Barbary Nut (Gynandriris Sisyrinchium).

Sometime soon I will exhaust my images of that recent trip to Israel. Still, these catches thrilled me, and I must, with substantial enthusiasm, share them with you. The Holy Land is gorgeous.

April through June, and those sweeties of the woods, Asters, are seen here and there. Never found in abundance, until summer moves along. Then, we notice Asters, different asters, here, there, seemingly everywhere. Whites, soft purples, bluish ones, tiny ones, larger ones. A boon for the bees, think bumblebees. Good reserve nectar, should butterflies not do well any given day. Probable destinations for moths too, no?

These I believe are Calico Asters (Aster Lateriflorus), though my National Audubon Society Field Guide to Wildflowers – Eastern Region cautions that there are several similar asters, with these narrow petals. Met them at the Jamestown Audubon Center, in Jamestown, New York, far, far away from my native Brooklyn. It was mid-July 2015 (the field guide cites August – September as Flowering Time), a tad early, but 2015 was a unique year.

This blogger, as many know, loves much, and Asters are solidly amongst the loved. 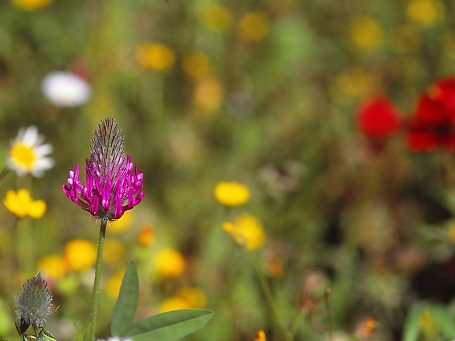 The wildflower in the foreground is the flower head of Purple Clover (Trifolium Purpureum). It was so pert, so richly colored, and so very intricate in pattern and design. Had to stop and shoot, shoot, shoot. This trail in northernmost Upper Galilee region bore March’s huge bounty of wildflowers, a hint of which shines in the background of this image.

Flowers from March to May, and it is difficult to pass without the requisite stop and stare. My, my, you are beautiful this morning . . . as the other wildflowers respectfully await their turn for attention.