She was nectaring on native Teasel flowerhead. When I found her, my rocket-fast examination of her wings gave me a sugar jolt! She was extraordinary. There’s always that 1/35th of a second moment of apprehension. Would she leave before I could position my Canon Elan 73 film camera with its Canon Macro- 100/2.8 lens?

Long time ago, very fine photographers, at Pittsburgh’s Filmmakers, opined that it’s preferable to position your main subject somewhere other than at the middle of the image. No time to do that here, for such a once in 10-years female Tiger might, probably might, go, go to another flowerhead or totally go.

I’m a ‘men,’ and some of us remember beauty long after we’ve been Blessed to meet it. I remember this one. The rest? We’ll leave that alone. 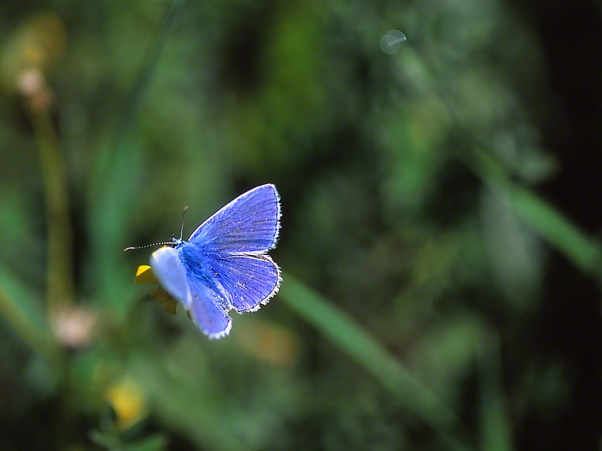 Reminiscing of the memorable blues (Sinatra, Paul Newman, that girl from the Bronx . . . ), the morning of chasing tiny blue butterflies in the land surrounding Neve Ativ wasn’t delivering good blue butterfly images. I was in the northeastern tip of Israel, on the foothills leading to Mt. Hermon, in the fabled, and very green Golan. Syria was about 4 miles away, with its ISIL, Hezbollah, Russian, Iranian Republican Guard, Assad-loyal gangsters. No sign of war here, what with the hidden, but very formidable presence of Israel forces. There was also that small military plane, flying back and forth over nearby valleys, searching for possible border breeches.

I fly there again on March 28th, to spend my first Passover in the HolyLand, ever. My hosts? Well, my own daughter Rachel and her family, especially Hillel and Boaz. No hotels for me, family will not hear of it. I love sitting with the men, 100% of whom have served, most having seen battle, some like Moshe and Misha, in multiple wars. Some who have gone on missions never reported, never discussed, all to defend and protect. Americans mostly don’t know what that is like, and for that we are Blessed.

As can happen, after more than 2 hours afield, this macho! male flew in, and choose a yellow bloom, and began to nectar. Bluer than blue, me whispering, ‘Don’t leave, stay put.’ He did, and know that none of my shares are re-worked, all are as they were real-time. Frank, Paul, that girl from the Bronx . . . don’t know why, but these tiny blues evoke memories of eyes, extraordinary eyes. Polymattus icarus in a meadow just northeast of Neve Ativ.

Shall I look for you on my El Al flight?