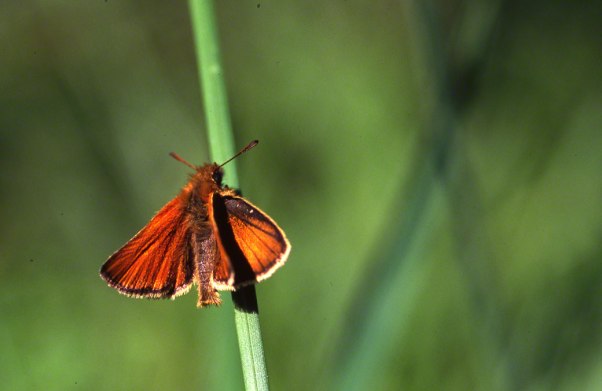 Well here is another American success story. First noted in Canada, this native of Europe and Asia entered the United States after 1910. As with most Americans and lots of our animals and plants, Thyimelicus lineal lives and populates much of the United States.

They fly from June through August. Our tiny, dainty subject here was resting on a grass stem in mid-June in Raccoon Creek State Park in southwestern Pennsylvania.

Easier to identify than many of the grass skippers, European skippers spend most of their time in grasses in fields and meadows.

They are not the fastest fliers and they fly short distances, close to the ground.

They spend alot of their time nectaring and can be approached.

So here we have a tiny, tiny butterfly that like most of us, traces its origin back across the Atlantic and when first, inadvertently brought to North American, flourished in the rich, bountiful land it found.

A reminder that we can expect an inflow of immigrants to time immemorial. They arrive often with very little and find an abundance of “nectar,” i.e., an opportunity to live, flourish and revel in the fruits of this extraordinary land.