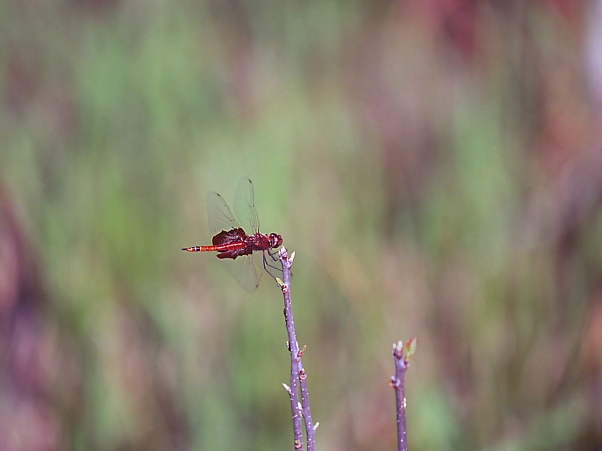 I have for these many decades admired Dragonflies. Never, in those 1,000,000 hours in the field, has a dragonfly ever bothered me. In an earlier post here, I retold the real life experience I had with one as a boy in Brooklyn. We lived on the edge of development in the 1950’s, and an undeveloped ‘lot’ was around the corner from my house. That’s where this Love of wildlife began, believe it or not.

One day, I, proud of my speed and street skills (I grew up on those streets, with very interesting friends, so to speak), decided to prove to myself that I was fast enough to catch a good-sized dragonfly in mid-air. Know what? I did, I caught a big one, that’s how fast I was. Arrrrrrrgh! The pain of it’s bite was unbelievable!! I respected my Connected friends and that morning, I came to respect dragonflies forever.

No dragonfly has ever bothered me since, despite the Disrespect that I showed to that East 57th Street dragonfly.

Now, 4 months in, at our home in North Macon, Georgia, the mosquitoes in our natives Georgia backyard are beyond nuisance. I want to put out a ‘Come On Down’ call to dragonflies to come and make this their home, come and daily devour your weight in mosquitoes. No chemicals Leslie, no chemicals. Dragonflies.

Please share what you know of how to attract dragonflies to our central Georgia yard. You’ve got dragonfly tips?

I’d read of them before, but had only seen such once in the United States. A mantid that lacked wings, and moved about on the ground only. A mantid not capable of short flights.

Where did I see this? On the peak of Mt. Hermon. Too bad YOU were not with me. You too would have stared and stared at this insect, like me, wondering aloud, why hadn’t G-d finished H-s work on this critter? It just looks like there was more to be added, but just no time to do so.

This mountaintop at the northeastern corner of the HolyLand/Israel is mostly closed nowadays, kept closed by the IDF (Israel Army (Israel Defense Forces)). It’s those more than 50,000 Iranian soldiers, they masquerading as Syrian soldiers, down at the northern base of Hermon, that must be watched, carefully watched.

Today Yaron Mishan shared pics of his fieldwork there, on Facebook, on the top of the mountain. Mama Mia! how I wish I could have joined him and the several others, seeking among the rarest butterflies in the world. 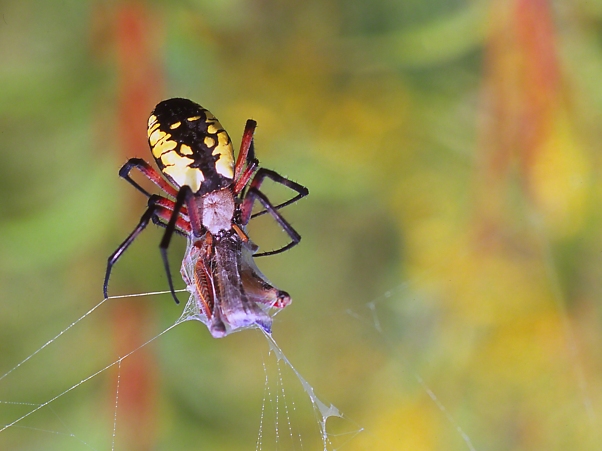 We show you now the full series of image captures of our Black and Yellow Argiope spider, after this grasshopper jumped into her web, and became entangled and stuck there. This female Black and Yellow had been stationed at the top of her web. I was right there, very close to the web, for more than 1/2 an hour. I was waiting to see what she would do when prey got caught in her web.

In the second image, Mrs. Argiope now has the grasshopper fully wrapped with web, rendering it motionless.

In the 3rd image, Argiope now comes and makes contact with the traumatized prey, and in the last image, either injects venom in the prey or begin to consume the prey.

I was at the Powdermill Refuge Reserve in Rector, Pennsylvania. Owned and used for aviary research by the Pittsburgh Museum of Natural History, their several thousand acres in the lush Laurel Highlands of western Pennsylvania is an excellent refuge reserve.

Not for the faint of heart, yes, but I hope that the complexity of this series fascinates you as much as it does me. I’ve mistakenly walked into many Black and Yellow Argiope webs over these years, to my momentary Horror, but have never been mistreated by these ladies, though I destroyed their lengthy nighttime work!

This, I believe is that Black and Yellow Argiope spider, seconds after we saw her in Warning: Not For The Faint Of Heart. She has immobilized the grasshopper and for added assurance, wrapped it in sticky web.

Me? I examine her closely, and what do I think? Amazing, the design features that this beautiful creature displays,  . . . all that from the Cr-ator.

Me? I remember this experience as if it were yesterday. She put on a show for me, and allowed so many exposures, so that I share them with you.

If you can get beyond the fear that some have of her, she is an engineering study, for sure.

That year grew Pennsylvania natives tall and robust. Working the meadows, forests and trails of Raccoon Creek State Park, 40 minutes west of the city of Pittsburgh, produced many cherished images.

This group of Thistle plants were all that, tall, strong and healthy. I chose this plant, a 7 foot tall giant, and hatched a plan.

I would stand under this flowerhead, and wait until a Swallowtail or a Ruby-throated Hummingbird came along. Still as a statue, maybe, just maybe, I could score a shot of a lifetime!

Life taught me to grow patience, and after about 38 minutes of waiting, waiting, waiting, I was reminded of those police shows on TV, with the New York City cops sitting in a police car, ‘staking’ out a house, awaiting the arrival of a criminal (now called a “perp”).

A Hoverfly hovering over this Thistle flowerhead, it loaded with tiny (?) insects.

This remains one of my all-time favorite images. True that!

I left shortly after, with my Hoverfly images, and no Hummer did come . . . .