Many will open this wingedbeauty.com post, puzzle over why this Jeff guy didn’t get a closer, better image, and close it and for a second time shrug, Why didn’t Jeff do better here?

Still wondering why Jeff didn’t cop a better, closer shot? Been using a Macro- lens these years. It can revert to more distant captures, but they will then lack the detail that I so much seek. Another reason? I’ve seen Compton Tortoiseshell Butterflies some 5 times in these decades. The closest I was ever able to get to one was some 10 feet away. That time in the wildflower Reserve at Raccoon Creek State Park, the Compton passed me on a trail, inexplicably stopped on a tree stump, and, when I SOOOO cautiously approached it, fled, even before I could robotically set my left knee down on the ground, to shoot away. There I was, 10 feet away from a tree stump, watching that Compton swiftly fly down the trail, Gone!

How many of you have also seen this ‘R-LU (Rare to Locally Uncommon)’ Brushfoot butterfly? 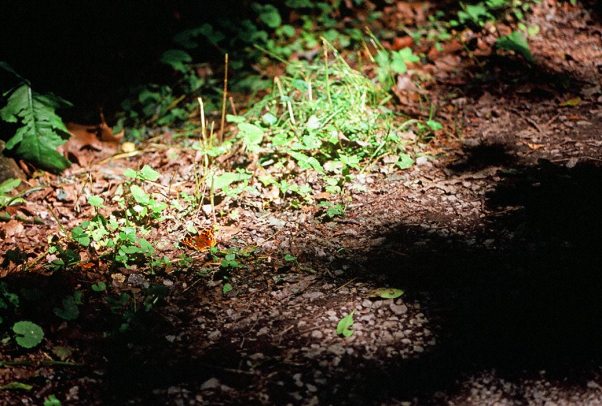 I have. Several times, as I search my memory. One of my most frustrating experiences in these decades was shared several years ago, the time that a gorgeous Compton Tortoiseshell butterfly rocketed down a trail I was one in the WildFlower reserve at Raccoon Creek State Park (what was its name?) It landed some 15 feet ahead of me, on a eight foot high giant tree stump. I was beyond myself with glee! and I was determined to shoot one of the finest Compton ever seen in the USA.

I made a super careful, robotic approach, 15 feet to cover minutes 18″ (Macro-lens). And? Some 5-6′ away, it rocketed away, continuing on that trail. I was so upset, pained by how close I came to a long-long-term goal.

Years later, having seen what, 2 more Compton, never closer than 20 feet from them, this happened. Uh uh! I was not going to go my entire life without an image. Not approaching further, I planted my Merrell boots and shot away.

Here is my image of A Compton Tortoiseshell butterfly, southwestern Pennsylvania. Knock this image at your own peril.

The problem was that they are ‘R-LU’ (Glassberg, A Swift Guide to Butterflies of North America), meaning rare to locally uncommon. They are never seen in any abundance, and  . . . they deny any approach.

I adore (AKA Love) their good size and dramatic, handsome wing coloration. Hundreds of visits to Raccoon Creek State Park in those years, often arriving at 8:00 AM or so, and that paltry score of three meet-ups.

Please understand then that this image delights me, though I know it must give you pause, it quite a distance from my Macro-lens. Know too that a moment later, it was . . . gone.

Should I or shouldn’t I? This has been one among many debates that have been bouncing around in my cranium for some time. A Nymphalis vau-album once flew right past me and landed on a tree stump. OMG! It was gorgeous and about ten feet ahead of me. This butterfly and I were at the Wildflower Reserve in Raccoon Creek State Park, southwestern Pennsylvania. I carefully made my approach, camera ready. I whispered a plea for Help from above (I really did). I wanted this image sooo much. I began to lower my left knee. It left at a very high speed, heading uptrail.

Several years have gone by, and several hundred trips into the field hadn’t found one Compton tortoiseshell. Here, on July 1, 2012 on Nichol Road trail in that same park, a Compton flew in. Another OMG! Cech and Tudor, in their superb field guide Butterflies of the East Coast, note that this species is “exceptionally skittish and hard to approach.” I knew that by now. So, I first took several pictures from a moderate distance and then began my approach (See the Technique feature found at the top of your wingedbeauty.com screen). Yep. As I continued my approach this Compton sped away. Far, far away and out of sight.

So I do have an image of this northern U.S. species. Like other Comptons this one emerged from its chrysalis within the last handful of days, and would fly until late October or into November. They overwinter as adults, in trees or woodpiles. Come early Spring, they fly again, and seek mates. Eggs are laid, caterpillars feed upon willows, birches, aspens and cottonwoods. Adults emerge from their chrysalis in late June to early July.

You needn’t search for them in July and August. Why? Like other species of butterflies, they abhor the summer heat, and aestivate during those months. Aestivate? This means that they search for a hiding place, and in that safe place, begin a period of hibernation-like rest.

Quite a story, Huh? Of course you know a better image is very, very high on my list. Note: The further north that you go in the eastern U.S., the greater are your chances of spotting a Compton’s. But be nimble, because they are one cautious butterfly!