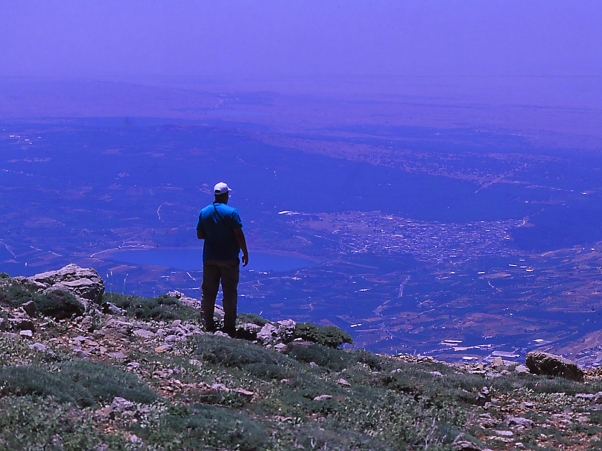 Eran agreed to guide me along the peak of Mt. Hermon. We were there, on that 7,000 foot high peak, at the northeastern corner of the HolyLand, this the mountain that looks down on the Golan Heights. We were there to find and shoot butterflies. Did we? More than I could have dreamed. Many of them were rare, only found on this mountaintop. Working this enormous Biblical mountain top, mostly alone, in that nearly boiling Middle Eastern heat . . . was exhilarating!

Was it dangerous that day? Not so much then, we knowing that Israeli, Syrian, Lebanese and U.N. lookouts had us in their binoculars and other advanced surveillance equipment.

Eran is seen here gazing down to Lebanon, where today, tens of thousands of Hezbollah fighters are massed, thinking that they, and their ballyhooed 50,000 or more missiles will massacre the children, women and men of Israel.

Keep your eyes peeled for news that the Hezbollah ‘Army’ has begun to move. Know that G-d will be there, and will deliver those ‘fighters’ up. You will retain this image in your mind of minds, I hope. Butterflies and barbarians, Yikes!