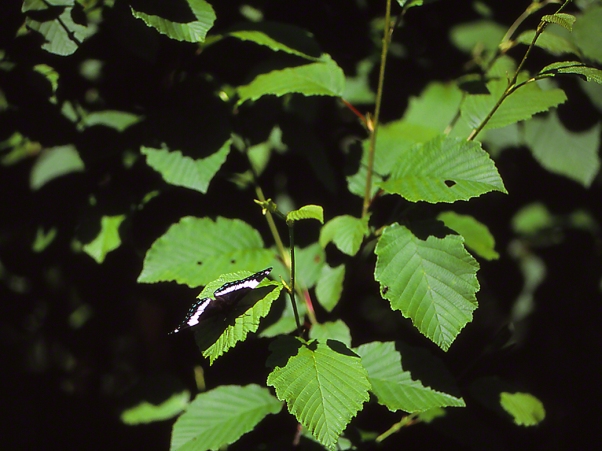 I’m working that trail in Chapman State Park, in Clarendon, Pennsylvana, in the northwestern corner of Pennsylvania. What was I seeing, Red-Spotted Purple butterflies and Comma butterflies, on the trail itself. Then, Whow! What’s that? A butterfly near the trail border, the same size as the others, but . . . it has a milk-white, sharply defined broad white band along its wings.

I shot away, got a few exposures, and followed it to the bush that it flew to. Here’s a fair image of a White Admiral butterfly.  After being happily introduced to dozens of dozens of butterflies found only west of the Mississippi River, I return the favor, with a butterfly not seen 35 of the States of the USA.

Of course I stood there after, wondering what was G-d’s Plan, setting such glaring White Stripes across those four wings, dorsal (upper) and ventral (lower)?