Just To Let You Know . . . that we will be quiet for the next 2 days, while we celebrate our Holiday of Rosh Hashanah. Oh, how we hope that all of you who visit us here, now and then, and your families, Enjoy the coming 12 months, fully and in Good Health.

At this moment, it’s sunny here in our 303 Garden in Eatonton, Georgia, with at least 32 butterflies flying about, seeking our Mistflower, Zinnias, Tithonia (Mexican Sunflower), Boneset, Ironweed and several million natives leaves, most still green and lush.

We appreciate you all, we do. Petra knows you bring zip! to my Life, and she prizes that, for sure.

I cherish those occasional 1 in 5 million (1/5,000,000) moments when you are intent on finding and photographing rare butterflies. Not all, in fact many/most end in frustration.

This is such here. He’s an Erato Heliconian butterfly discovered in a heavily shaded glade in the National Butterfly Center in Mission, Texas near the border wall. Images of the ventral side of an Erato are few, and I cringe a tad when I view this one. There are soooo few such, making this image, the result of a failed in the camera light meter, even more disappointing.

The flight from Atlanta to San Antonio, Texas, and the 4 hours drive to Alamo, Texas took some effort and expen$e. Missing this amazing opportunity? You tell me. 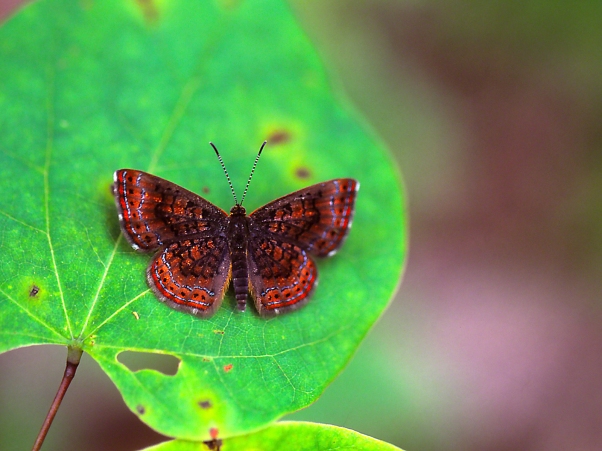 Ohio turned out to be a Goldmine for butterflies. I drove there from neighboring Pittsburgh, Pennsylvania, knowing that Angela and Barbara Ann would find orchids, and that would mean that I’d find . . . butterflies. I had no idea that we’d meet Dave and Joe and Flower and Deb and others, that meaning that our chances of success rose exponentially!

When my incurable roaming caused me to be separated from them in Lynx Prairie Refuge in Adams County (very southern Ohio), I thought that morning was going to be a bust for me.

That never happened. My solitary hiking brought me into a magical prairie/meadow, and there I had a Clint Eastwood, Make My Day! experience. In that prairie meadow I found rare Northern Metalmark Butterflies. I treasure metalmarks, and appreciate that any of their species are local, short of flight period and hard to find. Yippee!

Here’s one of them, a fresh Northern Metalmark Butterfly, hard to find, ‘Locally Rare’ (Glassberg, A Swift Guide to Butterflies) and spectacular, especially when the sun bounces off their incredible metallic streaky lines on their hindwings.

He’s a rare, very yellow butterfly, that you will never, ever get to see. Gonepteryx Farinosa flies in one of the 3 most violent places in the world, the peak of Mt. Hermon.

Crazy no? Here we are anticipating the year 2020, and this exotic large yellow, nectaring on one of Israel’s many species of thistle, lives on huge Mt. Hermon, lives surrounded by Israeli military personnel and sophisticated equipment. Why? Just below the peak of Mt. Hermon, on the northern base of Hermon, are killers. Killers of men, women and children. The last remnants of ISIL, the Syrian military, Hezbollah killers, Iran “advisers” and Iranian irregular killers, Hamas killers from Gaza, Pakistani advisers, North Korean advisers, Chinese advisers, possibly Cuban advisers, Russian advisers and who knows what other maladjusted men and women from the world’s savage countries.

You are unable to ascend Mt. Hermon. The Israeli military will not let you go up to see the 10, 11. or 12 very rare species of butterfly up there.

Me? How did I get this image? I went up to the peak with a guide, Eran, in June 2008, months after Frieda A”H (OBM) passed. My head not doing so well then. This unbelievable trip helped me, much. Was it safe then? It was before Syria was overrun by its own Rebels and by ISIL and the rest of the savage murderers. Even so, I was constantly off the trails (made over thousands of years by domestic cattle that roamed the mountain peak.), and I will never never forget when Eran called me over, to show me an untripped land mine quietly waiting for me to chase a butterfly its way!! That devil of a land mine was left over from earlier hostilities, on that magnificent peak. 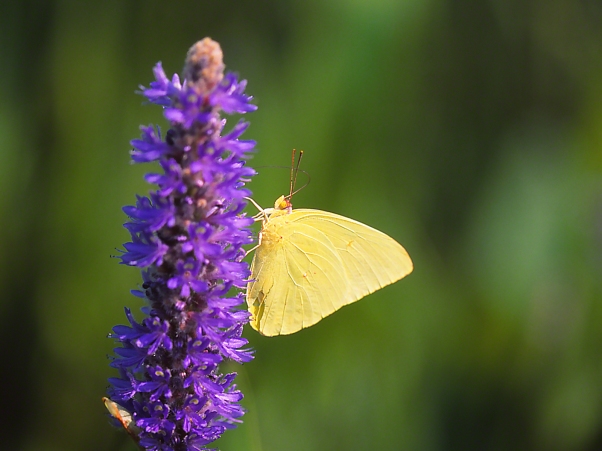 Glassberg’s A Swift Guide to Butterflies of North America cites our large, bright yellow Cloudless Sulphur as the “most common Phoebis.” I think that Jeffrey is right. At this moment, September 18th, we have as many as 15 of them flying in our 303 Garden (20 of them?).

They’re a joy to see, flying in shade or 98F sun, moving from our native flowers to our Tithonia (Mexican Sunflower) or Giant Zinnias. They are mostly kind, tolerating the presence of camera lens.

We notice that aren’t much shared here and on Facebook and other sites. That’s not the way it ought to be, for they are numerous, polite and pretty.

This male was seen on Pickerelweed blooms in a pond at Harris Neck National Wildlife Refuge, near the Georgia (USA) coast. Our boots came from there soaked, but no alligators bothered us. Don’t know who the much smaller butterfly was at the bottom left of the pickerelweed flowerstalk?