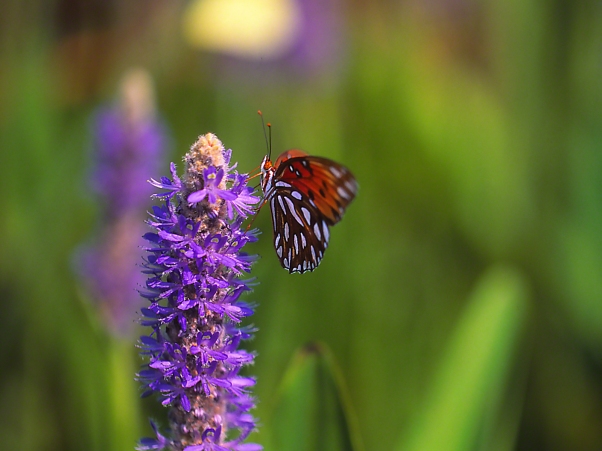 This sure tantalizes, bringing vivid memory of that spectacular spot, with its pickerelweed growing in 4 inches of pond at Harris Neck National Wildlife Refuge, on the Georgia coast. Stationed just away from the pond water, I was impressed with the diversity of butterflies that were visiting. Pickerelweed that must be pumping nectar, no doubt of that. This male Gulf Fritillary butterfly was fresh, complete (not bird struck) and hungry.

What’s the big deal? Harris Neck NW Refuge is loaded with alligators. At the time, the heavy traffic of beautiful butterflies to lush pickerelweed just could not be resisted. Even now, having survived the streets and all the rest, having taken guns from high schoolers back in Ozone Park, roaming the East Village before the East Village became what it’s now today, I sometimes (?) dissuade myself, internally arguing that risks are not as risky as they might be.

Might a 10 foot American alligator be near, just 15 feet from this spot? Isn’t it true that a ‘gator can accelerate, to cross 15 feet of pond’s edge in ‘x’ seconds?

Cliffs that give me the ‘Willies,’ Falling rock field where certain Satyr butterflies frequent, those Arroyos in Arizona and Israel where rain upstream can send a wall of water at you at what, 50 mph? Gators that are probably 5 times stronger than you think they could be?

Men who shoot butterflies are few and far between, and some of them devolve into 14-year-old -boy behavior when they see those certain butterflies, magnificent, exotic and challenging, no?