There I go again. Tooting that horn. How does it happen that I made some four different trips to White Tank Mountains Regional Park, west of Sun City West, Arizona, and see a “U?” Not just a “U” but a “U all year” according to Jeffrey Glassberg in his Second Edition of A Swift Guide to Butterflies of North America?

You ask where did I see this Arizona Powdered Skipper? I found this arroyo (bone dry creek bed) and worked it for many hundreds of feet. It was summer, and very, very few flowers could be seen. That kind of made it scientific. Find a plant sporting tiny flowers, and wait there some minutes. That stratum paid off several times, including the arrival of this hard to find gem.

Do I recommend this work for the faint of heart? NO. On a later trip I almost didn’t make it out of the arroyo, me lulled by that ‘I can go a little farther than I went the day before’  . . . until without Warning! I nearly lost all motor ability (Heat stroke?) and was too stupid to use my cell to Get Help (I’m a man, for sure, Yes, “man”). I managed to work my way out, most have looked like a drunk, hauling myself from bush to another bush, sitting in the modest shade of said bush, and repeating this again and again. I never interrupted “911” even if I could have hailed them on my cell. It’s tough being a “Man!”

Advice: If you’re shooting in an Arizona arroyo on a late summer morning, DO NOT DO SO ALONE. 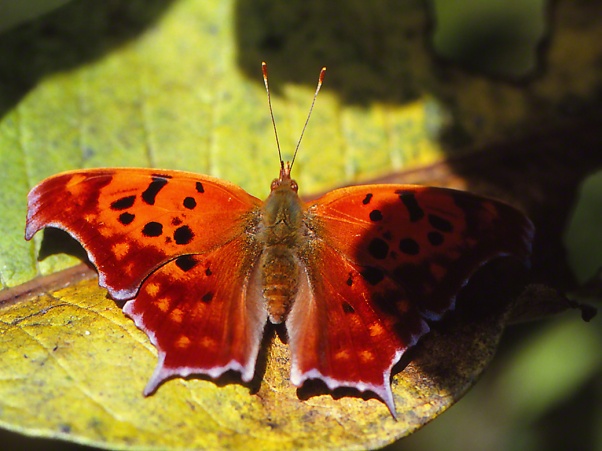 I was just musing over why we get so excited when we see a fresh Monarch butterfly, Giant Swallowtail butterfly, Red Admiral Butterfly or Metalmark butterfly. Yes, “we” for when I make my approach to a likely beauty, it sure is a rush when my eyes confirm that the object of my interest is OMG! gorgeous.

This image of a Question Mark butterfly triggered that thought. My scientific mind tells me that not more than 15% of us pay attention to such a butterfly as this, when we pass it, as it peacefully suns itself on a broad leaf at Raccoon Creek State Park, 45 minutes west of Pittsburgh, Pennsylvania (8 hours west of New York City, for our international friends).

Those colors that melt together so seamlessly, that suggestion of strong arrested power, the black spots seemingly painted by Monet, the fascinating wing margins and how they come together . . . and that talk that lovers of fine art share when they face a masterpiece, all that sings here, but to few, very few eyes and ears. No?

I think it was Sylbie who put me on to this book. I’m pretty sure it was her. I had always, going back to that’d empty Brooklyn lot at the corner of East 57th Street and Clarendon Road, wondered what America was like back then. Way back then. What did my East 58th Street look like before they built those brick row houses in 1940?

When my interest in butterflies grew, I wondered what butterflies flew there in say 1750? Facts like, Regal Fritillaries flew in my Brooklyn in 1750 mesmerized me. A strong word, “mesmerized,” but I can’t think of a better word for how I try to squeeze my brain to force out a vision of Regals seeking Butterflyweed in East Flatbush.

The book Sylbie had? Travels of William Bartram. His manuscript went unpublished here, and when found again, it was published in 1928. I’m telling you, he wrote that book for . . . me!

He was a Brit, university trained in Botany, and like his father, he travelled to the Southeast, and scoured Florida, Georgia, Alabama and South Carolina for rare plants that he would send back to Britain, to be studied and to be researched for medicinal use.

He writes with great ease, utilized his expertise in botany and wildlife throughout, and finds many, many heretofore unknown plants, flowers and animals. He deliciously tells of the Native Americans he meets. His descriptions of those first residents is the best I have ever read. He admires them, wanted to learn from them, and at times hints of an attraction to them.

Palamedes? He loved Palamedes butterflies back then in the 1770’s. Count him together with Roger Tory Peterson, William Audubon, Robert Michael Pyle and one or two others, who I would love/would’ve loved to work the trails of the amazing Southeastern United States of America . . .  especially in the 1770’s.

My extensive research indicates that only one out of 180,000 Americans have ever even seen this one, the Gold-Bordered Hairstreak. For Brazilians, the French, Rumanians and Thais, the numbers decline precipitiously. The same is true for Sri Lankans, Guatemalans and North Koreans, that is the viewer numbers plunge to near one in 8.5 million.

I was thinking about this, as I recalled how men and women sped to the “Wall” entrance Retama Village, in Mission, Texas, when the text blast went out, super rare Gold-Bordered at “The Wall.” Folks expert in the butterflies of the Lower Rio Grande Valley actually jumped in their cars to insure that they got a look at this Mexican native, in the United States.

What is it that made me fly to Texas to see new and rare insects at the National Butterfly Center near the border wall? What drives retired doctors, physicists, CPA’s, RN’s, teachers and officers in blue to dash over to catch a glimpse of a rare butterfly.

That most are esthetes, does that explain it? Yes? No?

We were in the perennial beds of the National Butterfly Center near the border wall. It was seriously hot: Mexican border hot, there in Mission, Texas.

The female Monarch butterfly flew in to Asclepias (milkweed). She was the largest Monarch I’ve ever seen. Make that the largest of what, 8,000 monarchs? Before I could make my patented approach, Whamo! this brute of a male Monarch landed on that same Asclepias. They communicated briefly, and then as fast as you can say ‘Howdy Doody’ they were coupled together in this embrace.

He is closest to you, she can be seen below him. Both were very, very large Monarchs. The Land of the Monarch giants!!