Monarchs, especially female Monarchs can be seen doing it. Seeking high grasses, and stopping deep in them, to rest for good stretches of time. This butterfly here is a Viceroy. That meandering rim of black that courses across the hind wings is the first assurance that it’s a Viceroy. We were working the trail edge through Lawrence Woods Reserve in Ohio, and that wetland trail was rich in butterflies, especially those keen on wetland habitat. Viceroys stay close to willows, and willows prefer the guaranteed wetness of wetlands.

Monarchs, Viceroys, Great Spangled Fritillaries, and Wood Nymph butterflies, all can be found resting, hiding in the high grasses of meadows and wetlands. Many a time when I see one securely tucked away in high green, I wonder. Is this behavior the result of conscious decision making by that butterfly or is what you see before you the mechanical response to prescribed behavior determined by genetic programming?

When I earned my BS in Biology, we were nowhere near even asking this kind of question. Are we much ahead of that curve now? 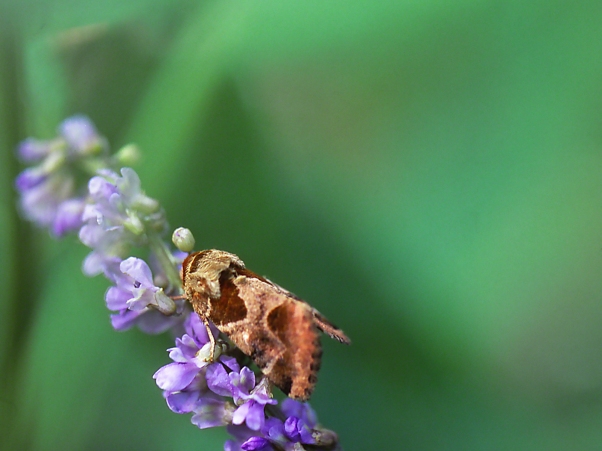 I tried to wrap my mind around what I was seeing. This evokes that startling time back in the late ’80’s. I was alone in the elevator, going down from Al Gorin’s office in the very tony French building at the corner of Madison and East 57th Street, itself a super 4-way in NYNY. It stopped, the door opened, and in strode a very comely women. Tall and handsomely dressed, Diana Ross and I chatted as we descended down to the building lobby, with its priceless deco elevator doors and lobby decor. Used to seeing stars in Manhattan, always at some distance, Diana was just gorgeous. Me? Well, I was Happy. Vegas’ odds of me riding an elevator with a beauty (me who seeks butterflies and visited Sotheby’s & Christie’s regularly ?) like Miss Ross, like impossible.

Felt the same when Dave and Joe called us to this small Spurge wildflower at Lynx Prairie Reserve in Adams County. As Janet, Barbara Ann, Angela and I all leaned into these tiny blooms, they Id’d this moth as a very, very rare, threatened moth that, along with the Spurge, is mostly unknown and unseen. The moth was almost never seen, and lacked a permanent name. What! Another plant and moth shoved to the edge of the species precipice? I stood there, as I did in the elevator, struggling to grasp the extraordinary moment and the wealthy of beauty before me.

A friend asked that I shoot and share HolyLand landscapes. Just about 0.05% of wingedbeauty followers have ever been there, that including those of you what have the dollar$ to actually book an El Al flight and go there. So, sure I agree to do so, though I am not a Sherrie Duris, Albert Bierstadt, Nancy Crosby, Peggy Klaczyk or Ansel Adams.

Not one to visit monuments, historical sites or such, I did now and then remember her request, and when I scoped places that I though you would find interesting, different and thought-provoking, I worked to secure good images.

Most imagine Israel looking like other Middle Eastern countries, i.e., dry, barren, rocky and watered by oases, found here and there.

This view from Neve Ativ, on the southern slope of Mt. Hermon, looks east. The foreground is easternmost Israel, the famous Golan region. The background is Syria, currently the world’s most active war zone. To the immediate right, and one hour and a half by rental car, is the Sea of Galilee, where Jesus Christ walked and taught.

Mt. Hermon is snow covered for 4 months of the year, and the melt from that snowy peak waters the entire region through most of the year. Those fields in the foreground? Israelis are adept at farming and engineering, and you see the product of such a combination of skills.

The serious fencing, topped with razor-wire? To deter terrorists from seizing the virtues of the night, for their heinous acts. It was April 2017 when this photo was taken.

The question? Is it safe there, Jeff? Safer than the street or county road you live on. How can that be? There is a very subtle, ever-present military presence there, and they employ the most sophisticated surveillance equipment, and they train as our US Marines do.

A pair of Great Spangled Fritillary butterflies, enthralled in tight embrace. Thousands of hours in the field, for me, and perhaps the 3rd time I’ve seen such a sight. They flew on my initial approach, locked in their kind of embace, and flew again on my next approach. Came my  persistent 3rd crouch, they kind of gave up, and tolerated my bad manners.

Large fritillaries, in a verdant prairie habitat, greener than green, they both looking fine, and robustly completing their respective missions.

A morning to remember in a very southern Ohio prairie. A moving experience for me, embedded in the lush life pool poured by the Creator.

Way, way up at the northern edge of the Galilee, I stood there looking at Lebanon. Hostile now, with the historic Lebanese at the mercy of the deeply entrenched Hezbollah hordes. Sad that, looking at a once peaceful, prosperous country overrun with terrorists, who boast, get this, that they have “100,000 rockets.” The boast of modern barbaric.

Yes, it was sunny and beautiful, and the war toys of those primitives remained in their storehouses. Good. I was in Metullah to see rare fritillary butterflies. Saw none in Metullah, and left there to visit Iron Falls, a park just outside the town.

Drove the few minutes to Iron Falls. Parked and worked the trails and agricultural field edges. I can’t say that I saw much to get excited about. The falls were spectacular, and it is amazing to see real water falls in the arid Middle East. Mt. Hermon did still have some snow cover, and the Galilee and Golan were awash in the product of the slow melt on Hermon.

4% discouraged, I headed to my Hertz rental car in the parking lot. Stopping at park benches that surround the lot, I took out one of my beloved Coca Loca bars, and 2 bites in, What!! I watched a sizable butterfly fly toward the picnic tables and descend down to the ground near me. Battlestations! A fritillary. Which one? One of the rare, protected species of frits? Would this day’s jaunt be a home run and a major success?

I slowly left my bench, protected my Coca Loca’s last couple of bites, and robotically approached the fritillary. It stayed at its spot. I carefully went knee down. The butterfly tolerated that. I shot Fuji ASA 50 slide film exposure after exposure. Some 13 or so exposures later, my heroic fritillary butterfly took off, as a rocket, and was gone.

Is this one of the protected, rare fritillaries found only in the northern Galilee and Golan? I am working to determine that!