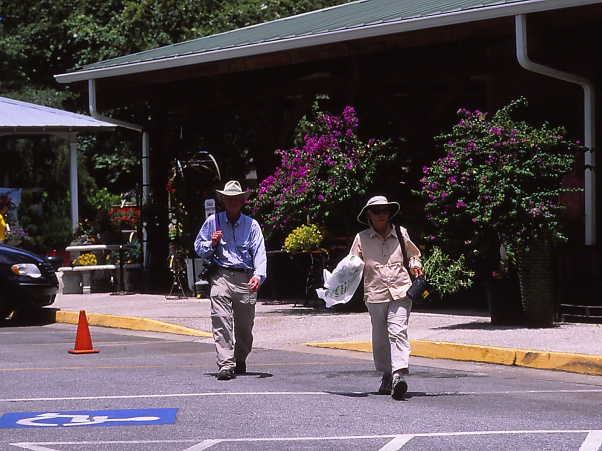 When those who live in the cities think of the USA, most/many fret that there is near a total net loss of wild, pristine land. Our national parks persevere, but I think city people believe there is not much beyond a mile from Yellowstone’s edge.

I think I used to be that. I remember the morning in the mid ’70’s when I asked my high school Biology class to look out of the window of our 4th floor classroom. That was the first morning that you could see the Manhattan skyline (NYNY)! New York City had worked hard to clean its air, Consolidated Edison had installed scrubbers and more, and you could finally see the Empire State Building, and sadly the World Trade Towers . . . . Though I was an experienced teacher (of Biology no less), parent and homeowner, I too thought pristine territory was gone, wasted, developed.

Happily!! I was wrong. I was locked into that Huge core city, and my horizons were limited, very. Despite the 350.000.000 or so of us who live in the 50 states here, America is vast, larger than we can comprehend, and that is good.

Now, I photograph butterflies, and travel, and meet folks like Nancy and John, shown here in St. Simons Island, Georgia. Nancy and John hosted me for an unforgettable week. We sought, and found, and photographed butterflies along coastal Georgia, rare ones at that, like Salt-marsh skippers, and Eastern pygmy blues and those Tinkerbells of tininess, Little Metalmark butterflies. And we talked, and we hiked, and we obsevered. They are world class birders, now also seeking butterflies. What an experience, being on trails with such sharing, knowledgeable and experienced naturalists.

These years I am seeing more, more sylvan, pristine almost primeval habitat. It is there, and it is protected, really protected by Americans like Nancy and John. That reality is so heartwarming for Me. Forget the political dustups swirling around us (well, TBtold I am a bit distracted, but . . . ), America has vast habitat under protection, conserved, and it has smaller, yet equally well guarded destinations, and Americans all around the country have eagle-eyes focused on these large and small wildernesses, and they Will be conserved. It’s the Nancys, John, Barbara Anns, Daves, Kathryns, Jennifers, Peggys, Virginias, Mikes, Angelas, Cathys, Roses, Jerrys, Tracis, Sylbies, Ericas, Sherries and Lisas that I know, and the other 1.5 million I have yet to meet, who are monitoring, clearing trails and overall conserving this gift of North America. 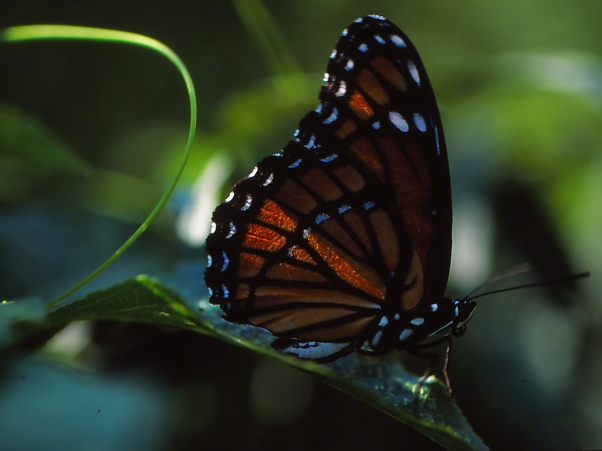 She is resting in the Habitat flora on a hostplant. Males have been making their moves on her, fine as she is, and between nectaring and shooing suitors, she must be bushed. Judging from her distended abdomen, she may well have a goodly number of Viceroy caterpillar eggs developing. That must make the attention of those males all the more exasperating. Don’t they get it?

We are in the Butterflies & Blooms Habitat in Eatonton, and Georgia sports those especially colorful Viceroy butterflies that the South is so proud of.

Hiding, the morning sunlight nicely streaks through her hindwings, and I like that. I like this little vignette, seen on  summer morning in one of the most beautiful places east of the Mississippi. Do Not doubt me. 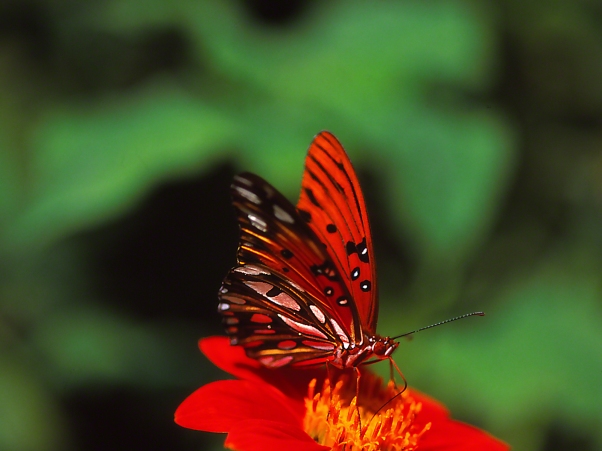 When you share your image of a Gulf fritillary butterfly, I come closer to the screen of my iMac, all 27″ of it. I want to see how well you did. That because I know how difficult that challenge was. Gulf fritillaries fly fast, fool you when you try to predict where they are headed to, don’t linger long on a flower, are very wary of approach when they rest on a leaf, all the time leaving upon your approach.

That said, it becomes very difficult to score a fine image of a Gulf frit. When I see your post, I know it was not easy to capture, and I study your image, wanting to see if it boasts several important features of this very pretty butterfly.

This one was enjoying the nectar produced by this Tithonia (Mexican sunflower). We were at the Butterflies & Blooms Briar Patch Habitat in Eatonton, Georgia. If you are reading this in Beijing or Sao Paolo, Eatonton is in the American Southeast, just east of the great American city of Atlanta.

The Gulf frit features I look for are: good look at an eye, proboscis nicely defined, head with its antennae, wing detail (this look pleases me with its rich left-wing detail and teasing look at the right ventral wing surface) and whether or not the wing color is broadcast out to you, with the same color as we see in the field.

I’ve just began reading Washington’s Crossing by David Hackett Fischer (Oxford University Press). I’m hesitant to share, but though I’m not yet well into it, I realize that all my life, obstacles aplenty, I’ve sought to be the kind of man that Washington understood. I have no doubt he would understand why I emulate Popeye that sailor man, why I can readily enjoy this book, and why I’m out Gulfing and not Golfing. 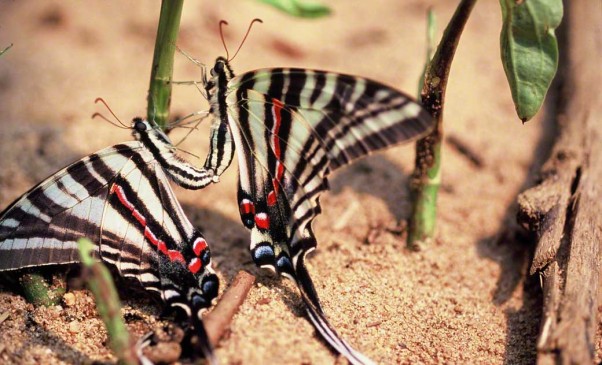 With our recent focus on Zebras, Zebra heliconian butterflies, I’ve included Zebra swallowtail butterflies, but did not share images of those zebras. Let’s remedy that here.

At a small sandy beach at Mason Neck State Park in Virginia, on the shore of magnificent Chesepeake Bay, was where I happened onto this! Zebra Swallowtail butterflies, motionless and locked together in embrace. They were both very shmeksy! Zebras, with reds, blues, that hard to describe whitish-yellow and black framing all. Not ever seen such a coupled pair since.

Funny this. After spending 13 or so summers as a boy with my Grandparents, the Polisars in their very sweet little bungalow just one block from the beach at Beach 65th Street, Arverne, Queens, New York (AKA Rockaway Beach), the beach etiquette was unwritten but universal, leave couples locked in embrace alone. Steer the widest berth, and move on. The world was complicated then too, and I guess time away from life’s ying & yangs was understood.

This pair of Eurytides marcellus remained this way for more than ½ an hour, barely moving at all. The memory of Splendor on the Beach when I was a kid, made me feel a mite sheepish about moving as close as I had to with my Canon 2.8/100mm lens. Truth be told.

Predators left them, vulnerable as they are here, alone, for those Paw Paws they consume earlier in life make them toxic to the mouth of any fool bird or insect or lizard that might have the opportunity. Amazing, No? 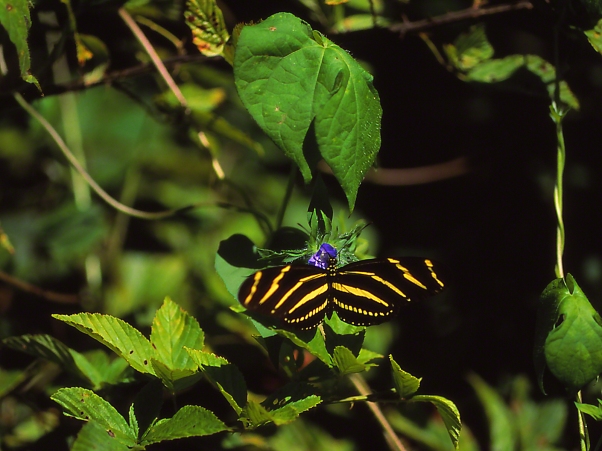 A couple of hundred miles north of their range, there they were, as Virginia and Mike said they’d be. My first thought when we met them, ‘Just as they’d be in Broward County or Naples!’ Or Cuba! I was so reminded of my first encounter with Regal Fritillaries, with Georgia Satyrs and with Gemmed Satyrs.

Pursuing Zebra Heliconian butterflies is brain Good. There have been more than 1 or 2 who have, sort of smugly, a slim smile forming at the corner of their mouth, repeated what I had just shared with them, they saying “You photograph butterflies!?” Not one to criticize others, let me say that I don’t know what sensual/intellectual stimulation their fun activities deliver for them? I do know that my field work, seeking and scoring images of rare and not rare butterflies delivers. Delivers big! Mike calmly let me know when that first Zebra appeared out of that Passionflower vine thicket, and I just shot to attention. Electrified, was I.

We watched as 2 or 3 of them left the vines, and flew from deep shade to blossoms. Minutes later they again flew back into the net-like vines, and . . . a couple of other Zebra flew out into the sunlight, replacing the first group. Then this 2nd group flew into the shaded passionflower. Electrified, as if we were in Cuba, a couple of hours out of Havanna, or in the NABA Butterfly Center near Mission, Texas. As if hundreds of NABA members visited to see, responding to an invite on NABA-Chat.

Pursing Zebras keeps on giving. it’s been months since that summer ’16 day, but I keep reminiscing, Jeff among the Zebras, my own well, hole-in-one.

What’s left to see? Are you kidding? Goatweed leafwing, Diana fritillaries, Cofaqui Giant skippers, Seminole Texan Crescent, for now. If you can deliver any one these, be like Dick Tracy, and let me know.