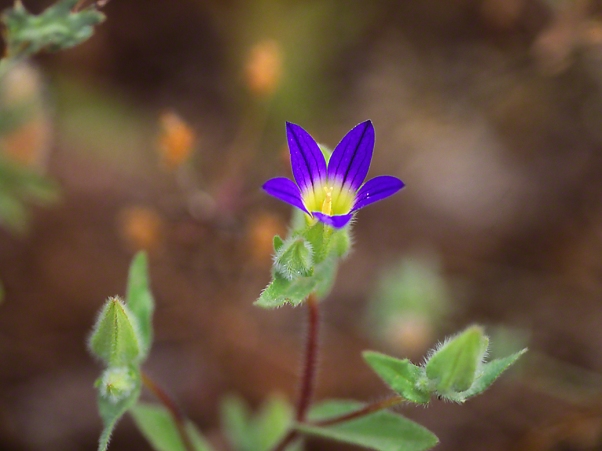 The butterfly action was good. March 2016, and so much was new to me. Never seen before butterflies, frustrating this American as they zoomed by on those Israeli trails. Tell me how badly you want images of uncommon or rare or common but catch-me-if -you-can butterflies. I captured my fill, but the beads of frustration were left all over, here, there and just about everywhere.

The Middle Eastern wildflowers at least posed for me, never fleeing my approach. That becomes seductive, and the temptation is to sort of, well, start paying more attention to exotic blooms, and quit the fools game of dashing after warp speed butterflies on the wing.

We’re at Ramat Hanadiv, endowed and spearheaded by one of the early Rothschilds (European wealth). Where? North of Tel Aviv and Netanya, northwest of Jerusalem, and almost screaming distance from the crystal blue Mediterranean.

Here’s a flower that stopped me in my tracks. I thought it to be beautiful. I liked its stark bluish-purple, against a lemon yellow was very eye pleasing. So, I shot away, hoping that you would also stop for a moment and find this a unique blossom, different from all you’ve stored away in your cerebral flower archives.

I have 2 Israeli field guide open before me, and they are, well, not 100% helpful. I know this is the look of the flower, real-time, but their images are well . . . washed out and how to say it?, mediocre.

I concluded that this wild flowering plant is Convolvulus pentapetaloides or Grassy Bindweed. I did this based upon resemblance, location and time of bloom.  The latin name a tad too long, the common name, way too plain, for such a nice looker. Our friend Barbara Ann promptly did her own research and correctly ID’d it as Campanula hierosolymitana or Jerusalem bellflower. Gardeners know the Campanulas. and isn’t this a swell name?? 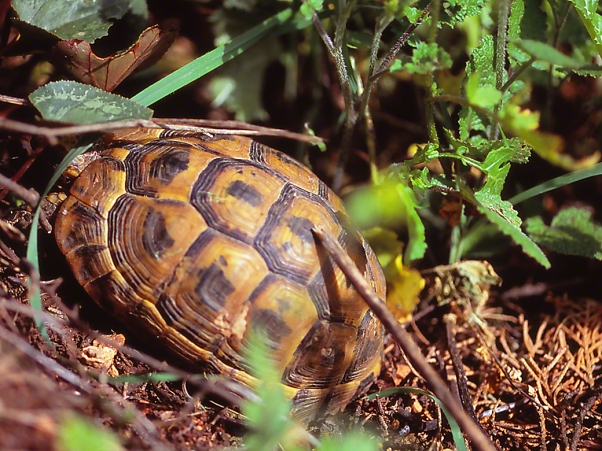 Vipers are what I had in a corner of the back of my mind. Israel is in the Middle East. Fact is, many vipers are native to this part of the world. March 2016 and here I am (Lucky Boy! for sure) in the Upper Galilee, very close to the border of that now bedraggled land, Lebanon. Windy roads rising and descending this hilly region separate villages that are distant from one another. Lots of wildlife here, and . . . butterflies. Beautiful butterflies.

I’ve followed an ancient cattle trail, and as usual I’ve made no less than 1 million steps off trail, following that butterfly, or investigating this wildflower/orchid. The kid in the candy shop, me. Always there is that thought, keep aware, for ‘many vipers are native’ to this very place. Thankfully, I have never seen one, since I began these field excursions in 2008.

Happily, enthusiastically! I met this Pookie! that morning. “Manishma!” I greeted her (?). Translation? “How are you?” A Middle Eastern tortoise. 9:40 A.M. and the Sun was beginning to bake all, and I nearly stepped on it as it was ascending a gentle slope. I shot away, and watched as it worked its way under vegetation. This was to be its cover from the hot sun, until sunset, I suppose.

A chance encounter, the only one I had for those 4+ hours, with the exception of cattle, which you’ve read here, can turn up, anywhere. She didn’t respond to my query, but we both had a break in our mornings. Not a viper for me, but a very comely tortoise.

Blues are found all around the globe. Here in the northeastern U.S. the Eastern Tailed Blue is well known, and a companion to those who hike trails. Stop and look, and they are just a treat, perched on a tiny leaf, all serious and earnest in whatever it is they are doing. Don’t look and don’t stop, well you’ve missed a cutie/sweetie, for sure.

Here in March 2016 I share a blue that I’ve rarely seen in Israel, the Eastern Baton Blue (Pseudophilotes vicrama). His upper wing blue is peaking out for us. We were on a trail at Ramat Hanadiv’s reserve, very close to the Mediterranean Sea. The trail had a gentle slope, and we shared a sunny morning. He perched on his favorite leaf, scoping for females who might fly by, me scoping for butterflies . . . .

The neat little bloom in the right foreground, what is that one? 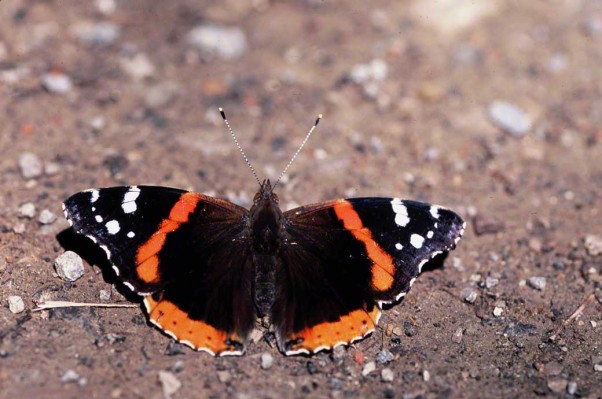 2016 will soon close the month of June. After trips to Israel, Georgia, Maryland and western New York state we settled in to consider what we have seen, and Why? Needing more field time to further our observations, I went to my favorite trail, Nichol Road in Raccoon Creek State Park in southwestern Pennsylvania. Three mornings spent on Nichol road trail and the adjoining Doak field (meadow of 100 acres +/-) and the conundrum grew.

Six rolls of film (Fuji Velvia slide, ASA 50 and 100) were shot. The average number of rolls of film shot during 3 mornings in the field, between 1998 and 2013, on sunny mornings without wind, would have been 14 to 18. Yes, I am more discerning now, with a solid library of images going back to the mid 1990’s. No, the exposed film product was not because the butterflies I saw were worn, or bird-struck. Most of what I saw was fresh and 100% intact. The single Wood Nymph I met today was especially fresh and beautiful (though not one exposure of that nervous Lep).

When was I out? The mornings of June 22, 24 and 26. Many butterflies I expected to see did not greet me (American coppers, numerous Wood nymphs, Pearl crescents, Duskywings, Skippers (only saw 3 species across 3 mornings), Sulphurs, Ladies, Hairstreaks, Azures, Eastern tailed blues. The only butterfly I saw much of is one that I rarely see, ever, the Northern pearly-eye. I beg your pardon! That tickled my thinking, that 2016 has begun as a footnote year here in this part of the northeast.

The botany? Here were numerous clues. Butterfly weed? Absent. Common milkweed? Scarce and what was there, diminutive. Teasel? Few. Joe Pye weed? Difficult to find. Bergamot, the bergamot that bedazzled me in 2014? Absent. What I did find was a goodly number of a beautiful wildflower, white Beardtongue (Penstemon). Nichol road trail also had an alarming number of Garlic mustard along much of its length.

2016 then is, is certainly a conundrum. The meadows, forests, trail edges and disturbed ground are covered with lush green botany, but populations of butterflies, bees, darners and others are way down. What triggered this stream of consciousness? There was a certain Red admiral butterfly (Vanessa atalanta), as beautiful as this one, that stayed with me on Nichol road trail this morning, posing patiently, moving as I moved, returning again later, and again, and I wondered was it a female, and I slipped into a wee bit of melancholia, sometimes triggered by butterflies since that day in 2008 . . . .

Closing thought? 2016 on its way to being: a Conundrum. 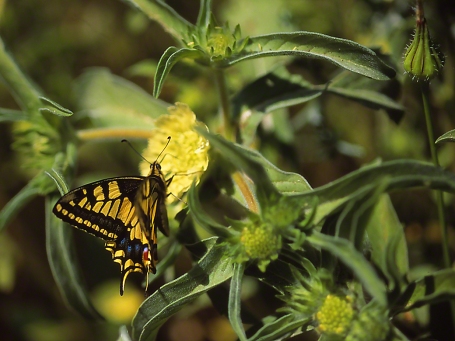 Eight? Nine? The number of visits I’ve made to Israel since 2008. Wonderful visits, meeting one grandson! The a second grandson! Seeing Rachel set roots and flourish. Relishing the vigor, beauty and success of this gutsy little nation. Tasting the sights, sounds, aromas and foods that are so unique to this part of the world.

My visits there are split between being guested at Rachel’s, where I am given the bomb-shelter room, and excursions into the field. Americans don’t know about this, Uh, uh! When they build a home, like Rachel and Uri did, they fortify a room and that will be the bomb-shelter room. Two years ago I was there, and sirens went off, and that meant . . . incoming from Gaza. So we dashed into that room with 1-week old Boaz. I was livid, having to go into a rocket-proof room with my one week old grandson. If all your sympathy is with them, you try living like that, and let me know how much you love it? My youth on the streets back then hardened me in a way, and that episode still triggers anger.

An objective of my each trip was to capture a good image of Israel’s swallowtail, Papilio machaon. They fly at high speed, are there and then gone! All my effort has produced few photo opps of these beauties. This one was a turning point. I was a Ramat Hanadiv, March 2016, on their exciting trails, when she flew in, and began nectaring. Daddah! She continued nectaring on the flowerhead. I shot, shot, shot, shot, and then . . . she was gone.