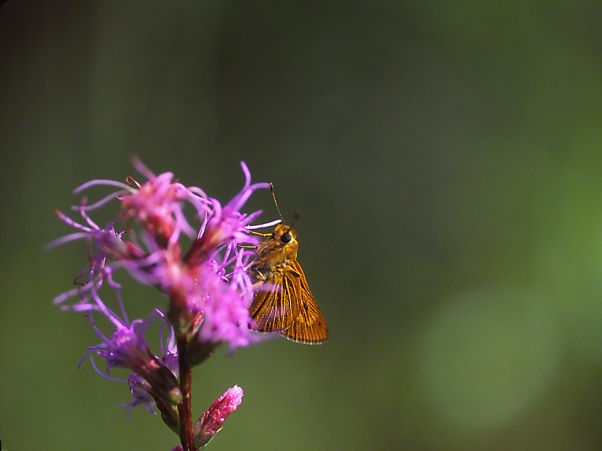 The trusty butterfly field guides, and that ‘Destination’ article in NABA’s magazine all forewarned, get to Florida’s Big Bend Wildlife Management Area at certain times, especially during September. Well I was jammed up in September 2015, so necessity was that I’d have to come earlier, at the end of August. All this because certain wildflowers, especially Blazing Stars (Liatris spp.) bloom in September, and they attract, really attract butterflies. I knew this to be true, for in September 2014 a certain Monarch female nectared at my Pittsburgh garden for a whole week, sipping from my Gay Feather plants (AKA Blazing Star).

So I got to the party early, but was ecstatic to see that the Blazing Stars had begun to open their blooms. Too bad, I didn’t have a folding beach chair in my truck, for it was like the checkout line at a popular supermarket. Butterflies lined up to sip and swoon!

Funny I was just thinking that this Byssus Skipper butterfly (Problema Byssus) (Thanks, BAC),  so contradicts the political tone in the U.S. and Europe and beyond. The emphasis is treat all as you would like to be treated, and be welcoming to others, despite how they look or act. Yet with more than 500 posts here on wingedbeauty.com, experience has it that there is a Skipper bias. My posts of Skippers contradicts the political mood about, and that will be reflected by a limited number of Views of this image. Skippers just don’t get the same play as Monarchs, Swallowtails or Parnassians.

One thought on “Got There Early to the Party”