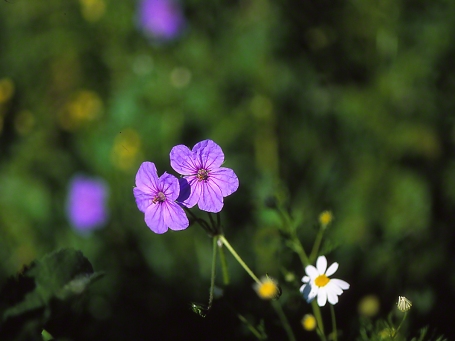 I was up there, March 2015, near the base of Mt. Hermon, in the hilly reserve of SPNI Hermon. The trails was busting bountiful with wildflowers, and the butterflies that I came to see and photograph. I’d brought 53 rolls of Fuji slide film (ASA 50/100) through Security in Pittsburgh and JFK New York and again through Ben Gurion airport. Each time Security and I spent more time together than most, with my “Hand Check!”requests, usually met with frowns and shrugs. My film did not get x-rayed once, despite some pleas that the irradiation does effect film. That a chance I do no wish to take.

So it was supposed, supposed to be butterflies only, but . . . the wildflowers could not be denied. New to me, fresh and beautiful.

These Hairy Pink Flax (Linum Pubescens) were just so pretty, perky and inviting. Why they are not pink, Quien sabe? Three field guides seem to ID them as such.