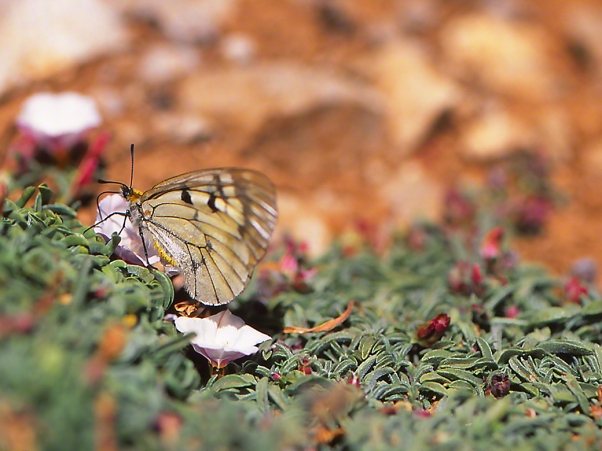 Rare, and closely related to swallowtails, this Parnassius Mnemosyne butterfly flies on the top of Mt. Hermon, at the northern tip of Israel’s Golan Heights. It’s ancestors dodged countless firefights on the mountain, in 1967. Happily, some survived, and our female here thrilled me when she flew in to nectar, right in front of me. Happy even though it was very hot up there in June, and we had to carry many liters of water to endure this field work.

Posted now because our slides just returned from Kansas, where they were processed. Weeks ago I was in Israel, and made 2 trips to locate butterflies. Both were again to the northern edges of Israel, eye poppingly blanketed with wildflowers. My goal was to shoot rare butterflies, see the northern version of mid-Israel species, and salivate over rare wildflowers, many of them absent for several years, now hopefully in bloom, rocketed up following Israel’s wet and wild winter. Found many of them as well.

So before I travel south to reunite with my 100-year old dad ( in a southern VA Hospice), I must find the time to at least review some of those 1,691 slides. Most will see the circular file. But, an anticipatory but, soon I look forward to sharing some of them with y’all. The butterflies of Israel, and presumably Lebanon and Syria. The wildflowers of those 3 countries. Wow!

8 thoughts on “They’re Back from Kansas”