We used to catch butterflies, beetles and whitetail rabbits when I was a little kid, in Brooklyn, back then. We lived in the East Flatbush neighborhood, right at the edge where development had stopped for a while, taking a breather, and that’s why a modest area was still undeveloped. That’s how Murder Incorporated was still able to dump bodies in burned out cars near my house, why we could find Black widow spiders, chase darner (AKA dragonflies), marvel at why the reputed oldest house within 300 miles remained a boarded up dump (it’s recently been saved and opened to the public), and we could go to see the Dodgers, all in the same day.

Our row house was probably built in 1940. As a little kid, I remember that the very modest, much older houses down at the corner (Beverly Road), used to have goats. Goats! This puzzled the heck out of me. What was it like before they built the thousands of houses in my neighborhood? What more was there than just goats?

We used to watch and follow butterflies. We ogled over Red Admirals like this one. We had no nets, no binoculars, no field guides and no one to direct our curiosity. Pity that. If only our school, P.S. 244 had offered us the renaissance education that we little kids were ready to soak up.

Back to those goats and Vanessa a. I’m 75% through William Leach’s Butterfly People (Pantheon Books, 2013) and there on page 254, Pow! There it was, there was what I puzzled over for so long:

Right up to the early 1890’s, hundreds of small market farms in Brooklyn fed the people of Manhattan. In this landscape, Brooklynites hunted butterflies and moths, and out of it arose the New York and Brooklyn Entomological Societies. Naturalists like George Hulst could collect moths, as late as the 1870’s, along Flatbush‘s wooded paths, and in the area’s glens and hidden recesses. By 1905, all the market farms were gone, not because they were unproductive but because their owners had sold them off to real estate developers.

I expect that many of you can commiserate with us here. Progress, development, extended electrical lines, paved asphalt. The little boy in me wishes sometimes that ….

There are so many startling views when the boy from Brooklyn cum Pittsburgh hikes through the low mountains of White Tank Mountains Regional Park. This Ain’t Beaver County, Pennsylvania. The sense of excitement rises and falls as I make my way around the boulders that floor the arroyo that I’ve traversed on at least 3 trips west. We have Black bear and bobcat here. Truth be told I’ve never seen either in these last 13 years in the field. After successfully navigating Brooklyn in my teens and NYC later on, you do kind of get a little cocky, kinda like Mr. Pesci of the movies.

But here in the arroyo, there could be mammals and reptiles and insects and birds and arachnids that I’ve never gone toe to toe with. That added real spice and expectation to this region. Many years ago I visited a refuge roughly  northwest of Sun City West. It was in the  desert, but was unique, with a small stream running through it. That available moisture sustained an unusual community of plants and animals. That morning I had it in my head that I wanted to photograph peccary, native smallish wild pigs. I chose an open spot on the bank of this stream, because across the stream, opposite me was a small beach-like embankment. If peccary came early that morning  to drink, I’d get them with my long lens.

So I sat there for about an hour, motionless,  waiting. It was just luscious there, beautiful. Then my thinking (I’m  always thinking) moved to OMG! Isn’t this Arizona? Haven’t I had my back (in my formative years in Brooklyn, you always had to know who/what was behind you) to thousands of acres of wild Arizona for about an hour. I remembered the very recent news stories, reporting tragic cougar incidents in not too far away California. A CHILL shot down my spine. I sprung up from my claimed spot. Forget peccary. This is new territory, son.

Now this image has tickled my memory for some time. I should have marked it when the slide was developed. It was March, my wife’s battle with Cancer had worsened. I was a Mess. This was much needed change of scenery. So much here was brand new to me. Did I see butterflies nectaring on these blooms? No. Back to that same note. I was there to work to reconstruct myself and photograph butterflies in arid Arizona. This wildflower introduced itself to me. I was much impressed with its beauty and form. I shot away with fair result. Beauty is very therapeutic.

Southwest Airlines flew me from Pittsburgh to Phoenix, Arizona. Depart from the temperate eastern United States to the southwestern desert that’s most of Arizona. Oak and maple slip away from my view, replaced soon by cactuses and a host of plants that are new to me.

Here in the White Mountains Regional Park, I park my rental car and hike to this arroyo (dry river bed). I’ve been here before. It is a source of fascination for me and here I’ve found a large number of butterflies.

That’s the wonder and mystery of this habitat. Hiking in an arroyo is generally not promoted. If there were to be an instant storm above, there is Big risk of raging floodwaters surging down through the bone-dry arroyo, and you’d risk being swept away. Gone. So the element of distant danger, even on such a day as this, is understood.

We’ve noted the relative abundance of butterflies in earlier arroyo posts. I’ve not studied arroyos. Are there aquifers resting below? Is that why plants endure the dry arroyo bed? Do the steep banks of the arroyo carry down the morning dew? Is there morning dew? Let us hope that we will find answers to these questions, from Comments made by our Arizona friends.

Working the rock strewn arroyo, you are constantly reminded of the presence of mammals, reptiles, birds, insects, spiders and more. They peek out at you, or dart away as you quietly traverse the rocks. There is scat here and there, both tiny scat and sightings of considerable scat. I found both herbivore scat and carnivore scat. I walk this arroyo in the morning. Who and what move in it during the black night? 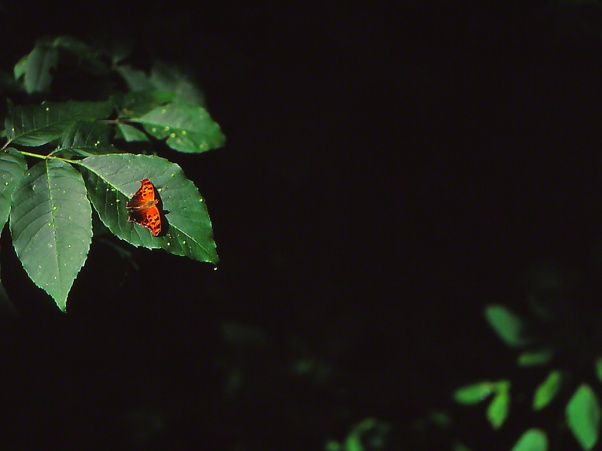 I’m 2/3 through my read of Butterfly People by William Leach and this book has exercised my thinking about so much that we encounter in the field. Photographing butterflies, as with this Polygonia interrogationis is never monotonous, alway the next minute offering up the definitely unexpected. This one (male? female? They are difficult to sex) zoomed up from the trail and set down on this leaf.

Do they have the ability to think? Does it revel in the knowledge that without net on long pole, slingshot or firearm, I had no way to harm it? Only some 10 feet above me, why does it tease me so? Does it know that I shoot macro- and that I can get no better image of it than this? The summer Question mark, basking ‘at poolside’ without concern of gawkers?

Back to Leach’s tome about butterfly collectors during the raging last 1/2 of the 19th century. Experiences like this one so exasperated Edwards, Scudder, Doherty, Strecker, Holland, Staudinger, et al. Whether it be in Raccoon Creek State Park, or India, or New Guinea or Brazil. Do they do it to tease us? Do they have the ability to think?

I say Nah! It is of course attractive to think otherwise.

Aargh! I erred by not noting the date that I shot this slide. They show seasonal differences, helping us identify this as a “Summer form” Polygonia interrogationis. These Summer brood fliers have darker markings and shorter hindwing tails. If it were a Spring or Fall generation, the coloration would have been lighter and more orangey, with longer tails. So this must have been a late June or July photograph. I’ve got to be more careful with such things.

I notice often that my posted images differ from those of other photographers. This one here shows the butterfly resting in the high grass, a preferred morning situation for this butterfly. Many who share their butterfly images show the butterfly occupying nearly all of the image, with very little habitat included. I’ve given this much thought over time. The scientific extreme closeup photo or a photo like this one, showing the butterfly along with a good deal of its surroundings. I’m often tempted to pitch these into the trash, perhaps to conform to the general influence of those other field photographers.

But then I decide, Nah! I’ve always marched to my own drummer and I sometimes wonder how others got so, so close to these wary imagoes (That 19th century term for adults)? I’m also reminded that I don’t like it when media or movies bring their cameras right up to someone’s face. That seems too personal and shares skin features and blemishes that should remain hidden.