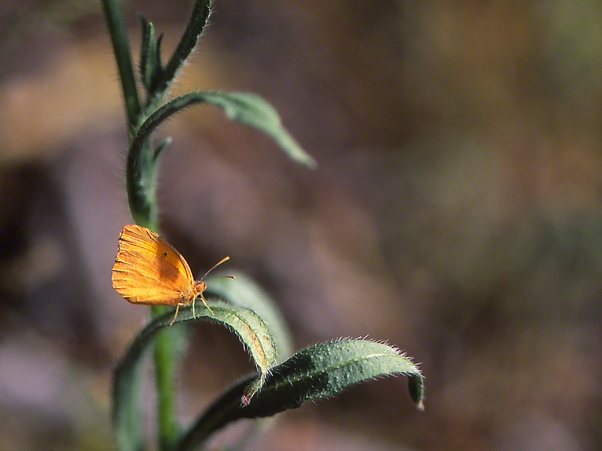 Remember that kid who they called ‘Tiny’ although he was the biggest kid in the grade? Then consider that Sleepy Orange butterflies are just as active and alert as the other Yellows. The field guides attribute its name to an early expert who noted that some of them have markings that looked almost like a “sleepy” or closed eyelid. That became this butterfly’s name in the 19th century. If you were given a chance, what would you name this butterfly?

This Eurema nicippe posed for this photograph at White Mountains Regional Park, west of Phoenix. It was during the first week of March 2008, and this Spring 2008 was dazzling with billions of wildflowers everywhere you turned. January had seen the end of my wife’s 7+ years of battling Cancer. This feast for my eyes was most welcome. I flew away from the winter in the northeast, away from being a caregiver, away from years of feeling helpless when confronted with the scourge of fatal disease.

This butterfly appears to be a male. That morning in early March I arrived quite early. This Sleepy Orange was just rousing, and I watched as he flew to this leaf and began his morning ritual. Lots of other photographers share photographs that bring you much closer to the insect. My photographic practice with my 100mm 2.8 Canon macro- lens requires that I approach within 2 feet or less. With this butterfly, I had to stop where I did, or risk losing him. After all seeing me approaching, which is something he can do, must register as a BIG RISK.

Sleepy Oranges fly from Florida to Southern California. They are rare visitors to the northern states.